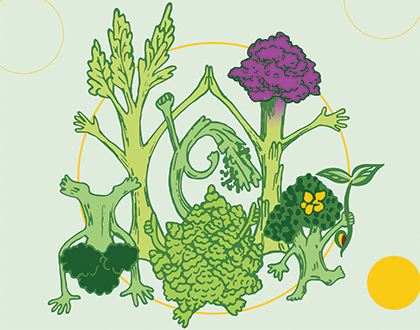 In the mid-1700s, a group of workers in the textile mills of Rochdale, England were faced with a strange situation: they had just gone on strike in protest of dangerous working conditions and unfair wages, but it failed. It was during the Industrial Revolution, and those who had more money oversaw the quality of food and living conditions for workers, consumers, farmers and producers. The mill workers could go on strike again or ask charitable groups for help.

At the time, people in Europe were moving from farms to burgeoning cities. Instead of eating their fresh, wholesome crops, they had to rely on stores to feed their families. People were hungry and wages were often paid in company credit that could only be used at company stores, which would adulterate products to increase their profits.

Thankfully, the mill workers had a vision. Motivated by their desire to live in a world where they controlled the food they ate and how they lived, 28 workers embraced the weirdness of their situation, pooled their money together, and decided to form what we know today as the Rochdale Equitable Pioneers Society—the group that founded the modern cooperative movement.

Just like the Pioneers before them, cooperatives exist to allow people to get what they want in a way that better meets their economic, social, and cultural needs. The Pioneers were so determined to make a different, nonstandard business model succeed that back in 1843, they created seven cooperative principles that all co-ops, including North Coast Co-op, follow today.

It starts with the members who own and run the store. Anyone is welcome to be a member of a cooperative, but it is not required to be a member to shop in stores. Members have equal voting rights (one member, one vote) and all members contribute equitably to the capital of their cooperative.

As a business model, the idea of a grocery store being owned by the people who shop in it is a bit weird. In the 1700s, the concept was so strange that a gas company refused to provide service to the Pioneers’ building because they thought they could not afford it. But after one year, the membership increased to 74 people. The Pioneers and early cooperatives implemented ideals that were well ahead of the time, like allowing every member, including women, to vote. In 1907, cooperatives implemented a minimum wage, which did not become a law in the United Kingdom until 90 years later. They also incorporated pensions and fair working conditions long before it became a societal norm.

For some in the business world, it is unsettling that cooperatives can be so successful even though we don’t always follow standard business rules. In America, many early co-ops failed due to insufficient capital and a lack of understanding of the cooperative principles by their members. Even North Coast Co-op had to close our third location in Fortuna in 1992. But, just like the Pioneers, the ideals of developing our local food shed, investing in our future, engaging the Co-op experience and promoting environmental responsibility allowed us to start our Cooperative Community Fund in the early 90s and relocate our Eureka location in 2006. Today, 11 years later, we continue to push to promote products grown within Humboldt, Trinity, and Del Norte counties, and we are financially stable enough to take on bigger projects, like remodeling the store in Eureka.

When North Coast Co-op was founded in 1972, it was the first food co-op on the west coast. We offered some weird things that other places didn’t—organic food, bulk items, reusable bags—principles that are becoming normalized in the grocery world today. Even still, today we are the only food retailer in California north of the Bay Area to be certified organic. We are a leader in local meat sales. And have you seen our produce selection? It’s the largest on the North Coast. Forty years ago, we didn’t like the idea of plastic bags, and today businesses in California aren’t allowed to sell them.

For North Coast Co-op, being weird means being true to who we are—we are not trying to be any other business. We are taking the values of the Rochdale Pioneers hundreds of years ago, and are applying them to be the supportive member of the community we are today. And it’s not just us – being authentic, or weird, is contagious and our shoppers and members are picking up on it. Our employees, managers, board members, and department heads hear positive feedback each day. Whatever you are doing—buying in bulk, reusing your bags, smiling, singing, eating local produce, rounding up at the register, shopping at the Co-op—is working. Keep on keeping the Co-op weird!

Explore the rest of the July 2017 Issue

In Celebration of Co-op Month